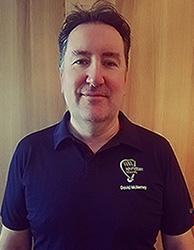 Elected to LHA Board May 2016 David McNerney took to Hockey later in life and is not that good at it. He has been a member of Bray Hockey Club since he started. He has played in various positions, but eventually settled on the snuggly and cozy life of a Goalkeeper, playing for Bray Mens 3rds. He occasionally umpires and isn't great at that either Contact: men@leinsterhockey.ie