You are here: Home / Mens Squad announced for Nations Cup 2022 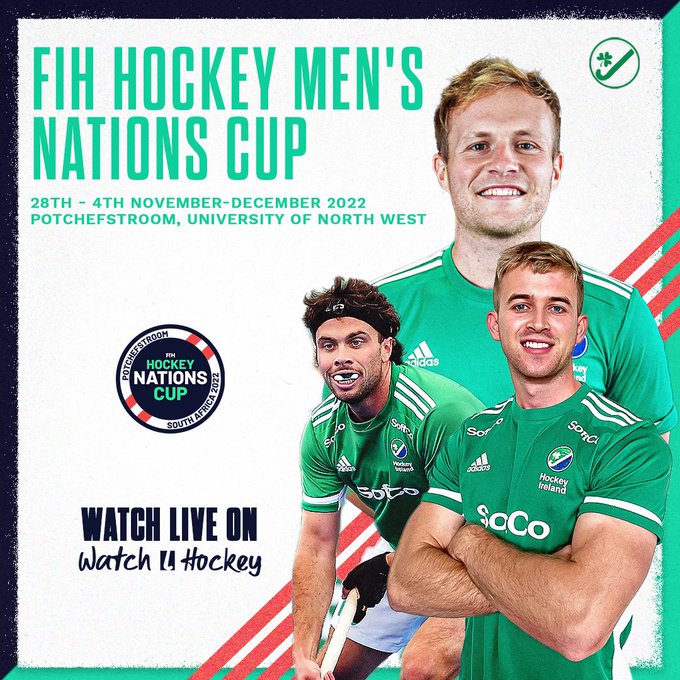 Ireland men’s Head coach Mark Tumilty has announced his travelling squad for the Inaugural FIH Hockey Men’s Nations Cup next week. Ireland will compete in Pool A of the Nations Cup in Potchefstroom, South Africa from November 28th until December 4th.

Eight teams will contend for the top spot with the winning side qualifying for the next edition of the FIH Pro League. Joining Ireland in Pool A are France, South Africa and Pakistan with the top two in the group qualifying for the semi-finals while the bottom two play the corresponding teams in Pool B for rankings five to eight.

Coach Mark Tumilty sees it as a good opportunity for his charges. “I am really looking forward to the Nations Cup and the chance to qualify for the Pro League which has to be an ambition for hockey in Ireland,” he said ahead of the announcement. “It is an excellent opportunity to gain experience playing against the different playing styles of France, South Africa and Pakistan. We are focused on the first game against France as we look to produce a much better performance than we did against them in Calais during the European Qualifier,” he added.

Tumilty is pleased with how his team have prepared for the competition with a series against Spain and Great Britain. “We have had a good build-up with games against Spain and GB where we got the opportunity to embed some key areas. We will look to improve further in South Africa,” he said. “It is a really interesting tournament with all teams evenly matched, so if we can be at our best, I feel we can achieve positive results,” he finished.

December is a busy month for the National Indoor Squads with the Men travelling to Cyprus for the Eu..